Before I get going…..a bit more on my old buddy Cesar Borgia…. his father (the Pope) had retained Leonardo da Vinci and as a result, Leonardo thought it wise choose the Pope’s son as a model for Jesus Christ in sculptures and paintings. Of course other painters and sculptors had to fall in line….Leonardo was the head of the European “Art Department” at the time me thinks. 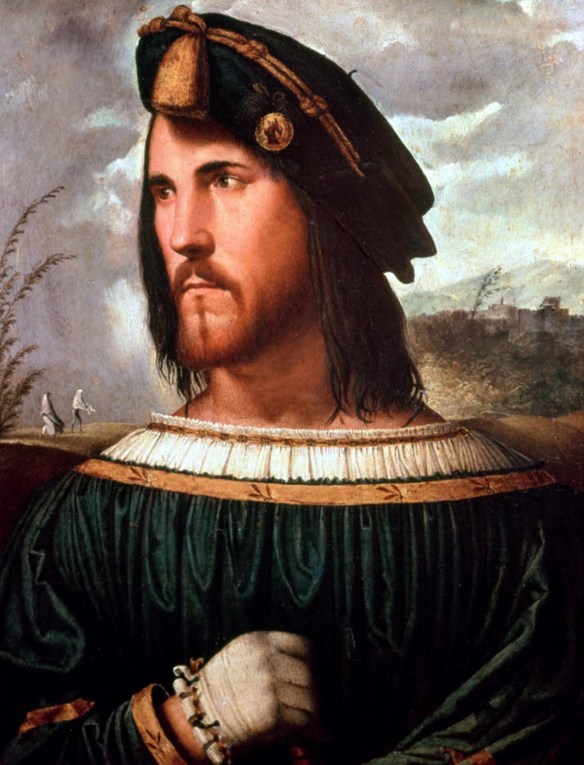 Does this guy look farmiliar or what? (Portrait of Cesar)

Today’s forecast is for 30c temperatures and the dreaded sunshine all day long. I am starting from Viana, and the plan is to walk 13km into Pamplona. My left foot and right knee have continued to provide enough pain to be noticeable each day.

When I woke up I decided not to take 400mg of Ibuprofen. (Pain killer and anti-inflammatory) I left Viana around 7:30am with a plan to take it really easy. Walk slow on the flats….and slower on the up and down hills.

I limped into Lagrono, a picturesque university town around 10am, and decided as the day was so young I would find accommodations at the outer edge of town. Lagrono is obviously recovering from the Wine Festival that ended yesterday. Stages, road barriers, and a generous coating of refuse was spread in liberal gesture. This is not to say the city looked like a dump….but there was a lot of evidence of substantial partying. 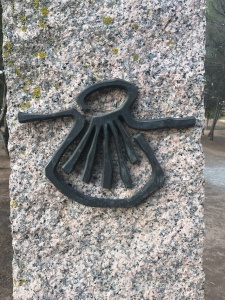 Lagrono was origianlly a Roman settlement, and today is the seat of government for the Rioja region. More importantly all Rioja wines are managed through this city. IMHO very few wines from this tiny region are worth the effort. World wide demand from actual Rioja grapes cannot possibly be made….so grapes from other regions are imported, blended and labeled as Rioja Wine. Sorry, but there is no possible way. There are some very good Rioja wines, but you’ve got to know they will be hard to find.

The walk out of town is endless. More than an hour before you finally are free of the city’s grip. Exiting the city is anything but mundane. You find yourself following an excercise path with many locals walking, jogging and cycling. Winding away from the city a lake appears. In areas of the shoreline you can see ducks, and swans. And for the passing pilgrims and locals a small restaurant overlooking the lake where you can have a rest from whatever brought you here.

Looking at the guide book, and checking iMaps it appears Navarette is less than 10km away. The oppressive heat has been held at bay thanks to a light cloud cover and a constant light breeze. I had finally taken an ibuprophen when I left Lagrono, and the nagging pains were starting to fade.

At this point I have to push on….actually there’s no option left but to keep going. There’s no place to stay around here as far as I can tell.

I have made an unfortunate miscalculation however. About 3 km from Navarette I try to take a sip of water to find the last sip….was in fact the end of the water. My water carrier was bone dry. I know I said the cloud and the breeze…..but it is really hot. Looking for water is now a priority. 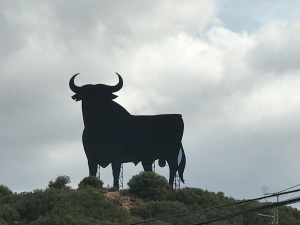 There are two notable (maybe only one notable) things to see on the entrance to Navarette. The first is an enormous steel bull. The bull is a symbol is Spanish culture and has been erected on top of a hill looking over the Valley. And the second was the ruin of a Pilgrim hospital. This was used for centuries serving the needs of the suffering pilgrims making their way to Santiago. Today you see an outline of the building, and sections of short walls.

But there is one thing of particular interest….a fuente… (water tap)

I casually stroll over, and immediately drink a litre, and then fill my water system for the remainder of the walk into Navarette.

It is after 2pm when I come into town, the tradition siesta time for the Spanish. I picked up a pamphlet for a Albergue. In the marketing materials they say in English “You will be surprised”.

Hmmmm….the obvious double take is required….and I decide to check in.

Surprising no. Nice…sort of. A disappointment…no. As I was able to get a lower bunk this will do just fine for the night. At least they are wooden bunks, not the tubular metal things commonly found on the way. 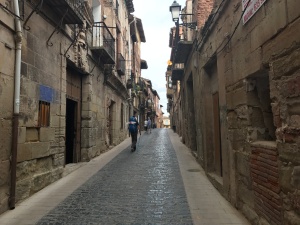 Nothing quite like having a plan to stay in Lagrono and end up walking 26km instead.