I spent last night in an absolutely lovely private Albergue in Ages. This is a small town with one means of survival…..pilgrims. My options were to remain in the grips of San Juan de Ortega, or walk a little further.

My Albrbergue is called El Pajar in Ages and is run by a young couple. They pour their hearts into every person’s experience staying with them. From the moment you hand over your passport and credential, you have become a part of their extended family.

Dinner was literally sold out, with people eating outside, and tables were also set up in the garage.

The meal started with a squash soup, followed by a delicious Paella and a large bowl of salad, and finished off with a custard. Everything was served fresh and hot to everyone’s complete satisfaction. 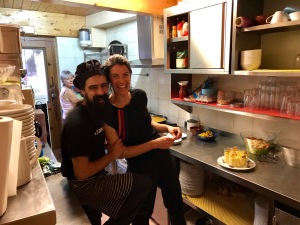 If you recall I mentioned about the “keaners” who leave at 6…..well this morning the person above me left at 5 am. (nutbar) Buen Camino Peregrino.

I finally left the Albergue around 7:30am and walked in the pre-dawn night. There is only one road out of Ages so it is pretty hard to get lost. After about an hour you come to a small town called Atapuerca. (pronounced ah-ta-poor-air-ka) A place everyone should be aware of. Out in the middle of a farmers field, literally in the middle of nowhere, are a system of caves. These caves contain the bones and artifacts dating human remains to more than 1 million years ago. This is such an important find Unesco has declared this a World Herritage Site. The site is still under excavation today according to what I have learned. The artifacts are on display in a large, impressive museum in Burgos. 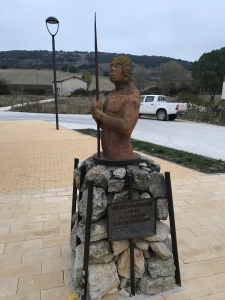 Immediately out of Atapuereca you head up and over a formidable slope. This is going to take about an hour of really hard climbing. The going is very tough, despite the fact we’re are walking about half of it on an ancient Roman road. (OK, not Atapuerca ancient, but still old)

The Roman road is treacherous at times and many people try to walk on the sides, but low hanging tree boughs constantly snag your pack. People are taking their time, advisable. Fall on these rocks and you will be hurt. At one point I come across a small group of English people. I stop to catch my breath for a moment and ask the gentleman beside me to remind me later in the day to put my gym membership on hold. We all have a bit of a laugh, and I am back on my way again.

Today seems so difficult perhaps because we are walking so much on asphalt. This is hard on the feet, back, knees, and mind. I have decided to carry my pack and wear my running shoes to give my ankle a chance to recover. I really don’t know if this was a good choice, the top of my left foot is extremely painful today…but my ankle seems to be OK…..

The road into Burgos is an endless torture. I discovered this with my Camino Family four years ago. You can count on 10 km of endless industrial, and blank suburban over build. We were advised to take bus #8 as soon as possible when entering Burgos.

In my case it was about 6 km outside of town. When I got on the bus it was like seeing all the same people from dinner the previous night. When the pilgrims on the bus saw me they started laughing…..I’m thinking because  I looked so shocked to see them.

When we got off the bus about 10 minutes later we were absorbed into a massive El CID festival in the city core. Streets were decked out, people were dressed up in chain maile, and costumes suitable to the period of the Spanish’s peoples greatest liberator. 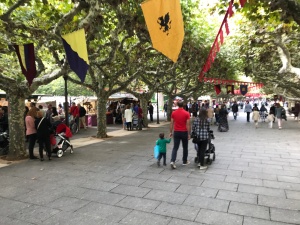 Beds will be at a premium for sure, so I head to the Municipal Albergue. This Albergue will only allow pilgrims to stay, and only for a single night. On the narrow street behind the great Burgos Cathedral a parade cuts me off from entering my destination. At one point the parade is temporarily halted, I dash between horses in the parade, and make it in the front door.

I register, get a bed, shower and decide to write my story for today, before going to try and find a bed for tomorrow night. I’m thinking this festival will lock things up pretty tight.