Last night was so odd. At 10:30pm someone came to the empty Albergue (save for one bed) and turned out the lights, and locked the front door. I had the place to myself. My choice of 6 showers, 6 toilets, and 8 sinks…..so much choice. There were heaters in the middle of the dormatory section keeping this room tolerably warm, but the bathroom areas are not heated. Makes you want to reconsider a midnight run to the bathroom…..is it really necessary? Unfortunately it was. Enough said.

There were a lot of upsides besides the choices in the bathroom(s). The first is I could have any bunk I wanted…so I chose a bottom bunk away from the front door, and away from the bathroom door. This is standard bunk selection protocol. This way people coming in late, and anyone using the bathroom at night will have the least effect on your sleeping. In this case not much of an issue.

More importantly my sleep would not be affected by someone snoring. Big bonus when sleeping with a large group as I’ve mentioned previously. (Korean Ladies, and Carl included in this)

Finally, there is no chance of mistaking something and putting it in my pack, or visa versa. When the contents of your pack are taken out it is possible for involuntary exchanges to happen. I have heard of some pretty funny stuff.

I did have a very good sleep as it turns out, and woke at 6:30am. I decided to take my time and leave the Albergue at 8:00am. This will still be very dark as Sunrise is at 8:52am. I have to walk 23 km today and there are not too many viable options. Lately my aches and pains have been minimal to non existent.

Leaving the Albergue I find the night watchman had left a key in the lock, on the inside. As there was no mail slot I decided to just turn out all the lights, and leave the front door unlocked. I don’t imagine anyone will be wandering around looking for unlocked doors at this time. I also imagine the night watchman will need to come by within the next 30 minutes to make sure everything is as it should be.

Out on the street the rain was falling, but was almost stopped. It had been raining all night so everything was very wet. The roads, and rocks were slippery….and the paths were mud. It was also obvious the rain had swollen the myriad of small creeks and little rivers spider webbing this part of Spain.

Leaving Azura the temperature drop was noticeable. I was wearing 3 layers and I felt a chill once the buildings and asphalt were not longer contributing warmth, and when the light of day started  to creep over the landscape it was possible to see the effects of the cold air on the warm land. Low lying fog.

As the trail descended into a valley the pilgrims ahead of me were consumed by the mist….a real Steven King plot line potential.

Today there are some longer uphill, and longer downhill sections. I was feeling really good today, and in an effort to stay warm I really kept a quick pace. I was passing a lot of people, and maintaining about 5km/hr. This would reduce my total time on the path to just over 4 hours without stops. As I hadn’t had dinner last night, or breakfast this morning….I was going to need a stop for sure.

About an hour and a half later I was in a full sweat once again, and came to a large Bar. It is major for the reason this was the first Bar on the trail since Azura…and I think everyone had left town hungry. I met Mel from Vancouver and he offered me a place to sit. His plan is to walk as far as he can today, and be in Santiago tomorrow afternoon.

When we are leaving Mel decides to put on his rain gear because of the threatening skies. I decide to wait an see if it is really going to rain. The path we are walking on is often under a tree canopy and as long as the rain is light, I may not need to put my gear on.

Well, it did rain a bit, and I continued to high speed walking, and I was wet when I decided to stop at noon to get something to eat. I met a lot of people taking shelter including a couple from Ottawa, and a couple from Melbourne, Australia. She had an interesting story….she had been severely injured in a work accident, and the doctors were concerned she may not be able to properly walk again. Here she was….and had started in St. Jean Pied de Port France to boot. Inspiring.

Unfortunately I was shivering when I left the restaurant, and decided the best way to warm up was to put the “pedal to the metal” and develop a head of steam. This was mildly successful, but about 30 minutes into my resumed walk the sun came out. Whenever I came out of the trees the sun actually warmed me up considerably…..so much so I was back into a full sweat once again.

There were a couple of sombering memorials today. These were originally set up for an individuals who died on the Camino. We’ve past a lot of these over the past month and a bit, but these are different. When you realize these people were within 25 km of Santiago it seems somehow more sad. Pilgrims leave their own memorials to fiends and family at these mini shrines as well. They can look a little trashy, until you look closer. 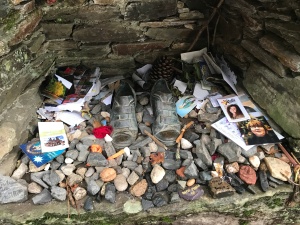 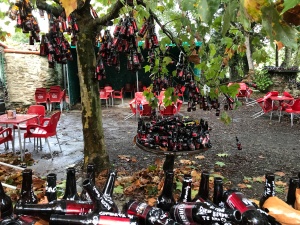 Somehow this didn’t inspire me drink beer…….can’t stand the smell of the stuff.

At 1:30 pm I made it to Pedrouzo. My walking day is over. Still no pains, in fact I could walk another 10 or 15km easily if needed.

What a great day walking…..