Last night we met with some members of the Irish Army while we were trying to find something to eat. Bene and I were feeling a little more than slightly apprehensive as apparently some people around us had enjoyed a bit too much wine/whiskey and/or beer.  Finally we were able to say goodbye to our new Irish friends without having to show someone’s “passport”. There are three people who get this….and let’s just say “What happens in Santo Domingo……..”

The Albergue we were staying in had a separate floor for people who were self confessed snore-ers. Unfortunately we had a room mate with low self awareness. He kept me up much of the night I was wanting to leave him a note saying…”Third Floor Please”.

As mentioned in yesterday´s posting the roosters play an important role in the community and especially the church. (re: story of the chicken coming to life) Our Albergue has roosters in the courtyard used by the cathedral in special ceremonies. Apparently roosters announce the day starting at 5:00am, sharp. Just as apparent is the fact they continue to crow every 2 minutes until you give in and get out of town. We capitulated and Santo Domingo was in our past by 6:30am. When you leave Santo Domingo you enter the countryside almost immediately and walk between fields on farming roads. It had rained during the night and the trail was damp. We came to an area requiring us to go down a short, but steep incline. Bene went first and I then started down….. on my second step my footing slipped and I twisted my right hip. I felt a sharp pain but thought it was just a bit of a twist, nothing serious. Within the hour it was apparent more rain was going to be in the forecast. We grabbed and put on our gear. Before long we were overheating and it was necessary to take the rain gear off.

Another hour and the rain returned with a vengence. Back on with the gear.  This time wind was driving the rain though all of us. This headwind caused my poncho to act like a sail on an America´s Cup yacht. It took a lot of effort to push onward. (and my hip was really starting to hurt) The wind and rain were relentless. At one point Bene started walking with a young man from Bayonne. They were able to motor ahead while the rest of the peloton strung out.  (We later found this same man lying in a ditch crying. A crumpled wreck of a man…… (rejected by Bene) OK, Bene demanded I put this part in…….

The entry to Belorado is somewhat hidden. At one point we walked by chicken farm…. quite honestly it was very fowl. (pun intended) Everyone must have been holding their  breath past this point……

After walking through waving farm fields the Camino path winds through a small valley and an abrupt turn in the road hides the town. It as taken us so long to get to this town some of the Albergues are fully booked. We look around and found a small private Albergue. They have two rooms, the smaller is quieter, but fully occupied at this point so we were forced to take a bunk in the “big room”. Happy to have a space Susan and I sign up. Just after signing in Bene (you will remember this is the only person I can call in Spain) gave me a call. Bene had arrived earlier than us and is staying in a different Albergue, located in a church not so far from us…..so we decided to re-group and do our laundry together….her Albergue doesn’t have a laundry service so she brought her stuff over to us. We will have dinner together tonight arrange to leave town in the morning with her as well. 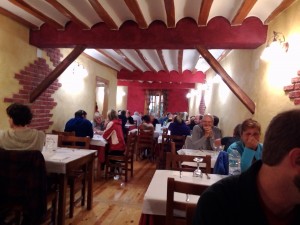 There are many meals you want to forget walking the Camino, but tonight was an exception. We had a wonderful meal upstairs in our Albergue and sat with a really nice fellow from Brazil called Rafael. He is a biologist an father of two from the south of the country. Rafael quickly became a member of our “Family”.

Our Camino family continues to grow……

BTW, back to our dinner….. I recommend the chicken. It‘s a house specialty.

Tomorrow I will be shipping my pack ahead with deference to my hip as the road ahead is though another mountainous region…….

This site uses Akismet to reduce spam. Learn how your comment data is processed.