My day off in Burgos was highlighted with my visit to the Cathedral, then spending a day in bed. Yup….the whole day from noon till 6:00am the following day I was on my back. Played catch up on a lot of email, look at a lot of information from manufacturers I have been avoiding, and taking long, hot baths. I had little, or should I say absolutely no appetite having done so little today so I didn’t bother to have dinner. Just didn’t feel hungry.

At 6:00am I woke up like a shot. I need the reduce the weight of my pack. Obviously this excessive weight has been causing all my knee and foot/ankle problems. So what was I able to throw away? Short answer…about 250 grams. (8oz) I boldly discarded a roll of tape, some plastic bags, a small toothpaste tube, and the small pockets from my ill fated pack in St. Jean Pied de Port. All in all an impossibly small reduction.

By 6:45am I was out the door and headed out of Burgos. I stopped at a Bar across from the Municipal Albergue and grabbed a bit of breakfast. Yogurt, a banana, orange juice and half a tuna sandwich for later. The weird thing is I did not recognize any of the people here. After traveling with the same group of people for the past 2 weeks I should be able to see a familiar face. Nope…everyone here is a newbie.

I finally put my pack on and realize I haven’t adjusted the straps since purchasing it. Here’s my take on the “101” of pack fitting:

1) The pack weight is supported on your hips not your shoulders.

3) The “load shifter straps” should be tightened so the pack is just touching the top of your back.(shoulders)

Suffice to say after walking with an ill adjusted pack…I finally had this sorted out, and what a difference this makes. Walking is easier and the pack isn’t pulling on my back any more.

I have given the impression I am on a solitary walk…..this is a bit of a false impression. I try not to walk with anyone for more than 30 minutes or so, then politely say I’m going to listen to some music for a while and plug in my headphones. Most people take the hint…..but a couple of people have continued to speak to me with my earbuds embedded  deeply into my ear canals. I’ll call those less observant folks the “perceptive ones”.

To set the record straight here are the people I have remembered meeting….some on more than one occasion:

Laura and Michelle from Florida

Laura and Gary from England

Jacob and Yeta from Belgium

Ben and Monika from San Francisco

The walk out of Burgos is under the cover of darkness, and clouds. A couple of people mention they feel sprinkles, but I haven’t felt them myself.  (Maybe I am one of the “Perceptive Ones”) Contrary to the movie The Way, you do not walk down a path to gates and the end of a park like setting. In fact you walk through the campus of the University of Burgos….a big campus. After an hour of walking you literally walk past the last house in a complex and the road abruptly becomes a gravel path. The end of the city sweet and simple, and it has taken about an hour.

The sun is trying to peak under the cloud cover and burn off some of the low hanging humidity…so far no luck.

So I decide it is time to start today’s playlist. At first I play “Rebuilding The Wall” a remake of Roger Water’s classic by various artists including Ian Anderson of Jethro Tull fame. Second is an album called Too Big To Fail. This is the music of Frank Zappa played by a group called FiDO. Then it’s onto Cat Stevens Catch Bull at Four.

The Road we are following today is the start of a region called the Meseta. This area is considered the prairies of Spain. Flat as can be, and based on my experience, the hottest place in Spain. For the record, the rain in Spain does not fall mainly on the plain. This place should be more aptly called the frying pan of Spain. The North East coast is where are the rain falls….And I’ll be there soon enough.

The one climb we have today is long and continuous. Not particularly difficult, but it just keeps going. For the most part this is a rock strewn farmers roadway, suitable for tractors and cloven hoofs. Pilgrim ankles must take a awful twist quite often on this road. Essentially there is very little to see on The Way today. I am so bored at one point I even stopped to look inside this little church at the side of the road. Otherwise I was alone with my music, my thoughts, and the path under my feet. 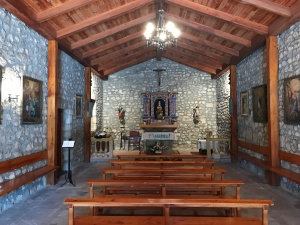 Which brings the whole story back to me….. How am I doing after my day off to recover you might well ask. My right knee was doing well until about 11am when it started aching. Not pain, but aching.

My left foot and ankle are not as cooperative, however, I was wearing my boots all day, and when I finally released my foot from the boot my ankle felt much better.

My plan going ahead is to get off my foot as quickly as possible at the end of the day and see if I can reduce the agrivation. So far today swelling does not appear to be a problem.

I walk into Hornillos and immediately check into a private Albergue called Del Solasol. The owner Samuel is a really nice guy and give me a lower bunk……one more point for the nice guy. (Samuel)

This Albergue is only 15 Euros for a night and breakfast. Nice. The next surprise is they provide shampoo, a huge shower with towels, blankets and full pillows. Where were these people 4 years ago?

I think I’m just going to hold up here for the night…….