First of all it appears I have lost my glasses. When packing up this morning my glasses were no where to be found. It is very likely I took them them off, which is my constant custom, and left them somewhere. I contacted Maria and Casa Fernanda and although she remembered me very well, my glasses where not left behind there. (I have to say it was so good to speak to Maria again….)

Well, I have two pair of sunglasses so I should be good to go for the rest of my trip. My vision is excellent in the short range, and the glasses are only required for distance correction. Night time might be the only requirement….but as I am not driving I will make due. Apparently time for new glasses.

So the day started  with Patti and I starting out of town at 6:00am. A couple of hours earlier than most other days. As we left Ponte de Lima the clouds were hanging low over the mountain we needed to cross. Rain was definitely in our future. 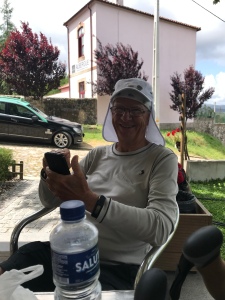 No need to wait….within an hour he had put on our ponchos….followed shortly by rain pants. Of course under the poncho you sweat like crazy….you are obviously dry from the rain, but you are soaked by sweat. About an hour out of town we started to see an incline in the road….and this continued more or less relentlessly. After about 2 hours of somewhat exhausting climbing mostly on road surface……combined with the rain we went decidedly rogue….make that off-road. We were now on paths and rock faces….and the incline turned sharply up. The paths were treacherous…slick from the rain, muddy, and generally not safe for mountain goats….let alone pilgrims. It was necessary to be careful with each step….one slip could be extremely serious. I was concerned something would happen to a pilgrim and getting help in this location was going to be a major undertaking. To say it was ridiculously steep in some sections is a major understatement. 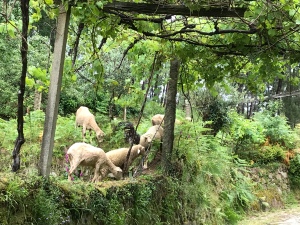 After about and hour to an hour an a half we made it to the top of this mountain…..and the rain stopped. Yeah, but we were wet, and the breeze at the top made the temperature feel like -10c….it was cold. Had we not been wet it was likely quite pleasant. 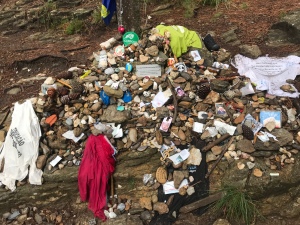 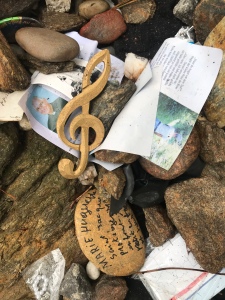 It was necessary to get off the mountain top as soon as possible. Keep moving and warm up. My goal today was a modest 20km. Patti already announced she was going much further and we bid farewell. Each person has their own Camino…..and we had shared a couple of days.

My Camino was to take me to Rubiase today. There was a nice sounding Albergue there and trying not to aggravate my PF was pretty much top on my priority list. This was now on the downside of the mountain and making headway was much easier than the morning.

Just after noon I was walking into Rubiase….think I can find the Albergue? Not a chance….so onward I went.

The next hamlet offering accommodation was in 45 minutes……and it turned out to be beds above a restaurant. There were a large number of young Portuguese kids smoking outside….so I decided to keep walking. Just didn’t like the vibe of this place. The next town had a number of bunks in a converted storefront…..and a telephone number scotch taped to the door. If you would like to stay here…call.

Finally after about 28km….remember the first part of the mountain, I arrived at a really nice looking Albergue. This is a fully renovated, large farmhouse. They offer a bed, dinner with wine, breakfast and laundry for 25 Euros…..sold!

it turns out the owners of this Albergue are Canadian…..a bonus to some. The evening turns out to be full of wonderful surprises…..