Our dinner last night at the priviate Albergue Titas was prepared by the Mother. A real home cooked meal….and it was sensational. I sat with Nicole from San Fransico, and Steph from Connecticut.  We started with a vegetable pure soup everyone raved about. Then roast chicken in an onion sauce, both breast and leg, with a wonderful fresh salad. We were also served a wonderful red Rioja wine for dinner out of real bottles. Notrmally the wine for dinner is served in jugs….and I won’t touch the stuff. This was a really nice Tempranillo, and everyone commented on the quality of the wine.

At the end of the meal, a small amount of ice cream was served, and everyone felt this was one of the best meals we had enjoyed on the Camino.

My intention was to get to bed not later than 8:30pm and get a really good night’s sleep. I managed to get into bed right around that time….but the person sleeping in the bunk beside me decided to come to bed at 9 PM and proceed to pack his backpack over, and over again.

Finally some other people came in around 9:30 and turned the overhead light out on him….so he turned on his head lamp, and continued packing. Suddenly he left for about 20 minutes and then return, and fiddled with his pack for another 15 minutes.

I wasn’t the only person he was keeping awake…. I was concerned someone was going to be less diplomatic just when he stopped, and turned his head lamp out. Finally I got to sleep around 10……the take-away….there are jerks on the Camino too. 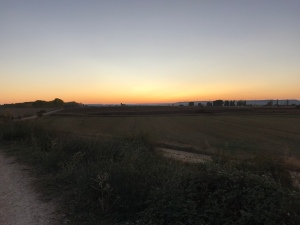 The morning came too early for me and by the time I packed everything, had a bit of breakfast, and got out the door it was 7:45am. A bit later than I had wanted. My thinking was to be aware of the forecast high today will be 29c. I want to be off the road by 1pm at the very latest….earlier if possible. This will required getting out of the Albergue as early as possible. As it turns out…it wasn’t going to happen.

The first part of the day is a walk into a town called Fromista. This town is notable as when walking the last couple of kilometres you walk beside the Castille Canal. This is a major irrigation canal, and the tree lined path is quite beautiful.

The town itself isn’t much to see, but there is a beautifully restored Templar Church right in the middle of town. The last time I passed through Fromista I couldn’t get inside. This time I was just too early…and I wasn’t going to get in again. I’m sure there are many pictures available on the web….mine will just have to be taken another time.

Once around the church and I was out of town…..onto the flats with the sun now rising. There is no shade to be had anywhere….this day promises to be extremely hot. I have 2 litres of water, and a second backup on a half litre. I’ll be fine.

Roughly 2 1/2 hours into the day I decide to stop for a bit of food. I order a potato tortilla, well I actually ordered a tuna tortilla, but I suspect they haven’t had this for years, and always serve the potato variant despite the requested order. I pull out my Tabasco sauce I am carrying…and make the best of it. I am joined by Izzie from Panama. She’s thinking she has a bit of food poisoning…..I suggest it may be the water. In 2013 roughly 18 people eventually had GI problems in this area. 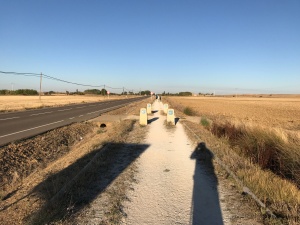 Since Burgos I am anly drinking bottled water….as a sensible precaution.

The day feels intolerably long….partly because of the mounting heat, lack of shade and boring roads. It is hard to zone out when you find the path switching from rubble strewn, to compact, to baked mud, to asphalt constantly.

At long last I came around a corner and Villalcazar. Another fly spec community on the Meseta. I head to the end of town to find the only private Albergue in town, and get a bed. On the way into town I see a home, built into the side of a berm. It appears to be a full house….???

My feet have had it.

I check into Toscanini Don Camino on the edge of town. By the time I have a quick bite for dinner my back starts to hurt for no reason at all. In an hour it’s all I can do to stand up from the chair I am sitting in.

I have headed to bed, taken an ibuprophen and am hoping this passes…..

Now, about the title of today’s installemtent…. I have 18 official stages to complete and I need to arrive in Santiago on the 20th. As tomorrow is the 6th I have 15 days remaining to get there. This does not account for any delays, or rest days….say for a painful back. It is also worth noting the portion after Leon is quite mountainous again…and I may not be able to keep to the official schedule….I will have to fingure this out very soon. Mathematically speaking I have need to skip ahead a bit…….