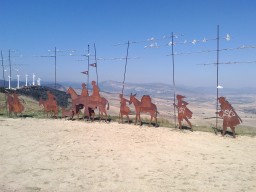 The previous night, after spending dinner with Susan, Mark, Zeb (the birthday boy), Tim (another Australian) and Ian (he’s a Kiwi), Bene and I purchased Spanish SIM cards for our phones. We can phone each other for free and send text messages. This is a big advance for us as we can now find each other easily.

After our technical purchase Bene and I become separated from the rest of the group. How absurd is this? The only person I can call in Spain is right beside me. After looking around for anyone in the crowd looking familiar and not finding anyone we decided to look at sleeping bags. Bene has a monster bag loaned from a friend and I have nothing at all.  I still remember how cold I was sleeping in Roncesvalles. Bene decided to send her friend’s sleeping back to her and I decide I need something light and compact. We decided on the same bag and headed back to the Albergue after a long day, completely exhausted once again.

Our little group consisting of Susan, Bene, and myself decide we should spend the morning in Pamplona. (Eddie wanted to stay in the German hostel) We took it easy and left our Albergues after 8am and started to look for a place to have breakfast.

At breakfast Susan decided she really wanted to visit a local Monastery.  Bene and I decided to press on and were on our own for a another 26km walk. It turns out later Eddie decided to take the day off and nurse what have become his extremely blistered feet.

So we set off really late in the morning from Pamplona, and what a day this was to be.

After leaving the city limits around 10am it became immediately obvious we will be climbing a mountain today. There are a wall of mountains before us. As far as you can see, the distant ridge is decorated with regularly spaced, massive windmills. Our only thought is the hope we will be climbing one of the smaller peaks?

Before long we were heading into the mountains and gaining altitude….big time. After roughly two hours of pushing ourselves madly we were able to claim victory….we had managed to climb the top of this range, and receive our reward.

This is the location of the famed “Pilgrim Statues” made of solid plate steel. Alto del Perdon.  If you have seen the movie “The Way” you may remember seeing this sculpture when the principals were surprised to find people riding bicycles on the Camino. We were far from being alone at the top. At least one tour bus and many cars were delivering tourists of all persuasions to this beautiful, and significant vantage point.

After many pictures being taken the decision was made to walk another two hours before lunch as we had eaten so late in the morning, and actually began today’s walk so late.

The temperature was now over 30c and the sun is relentless. We scaled down the side of this mountain over a loose rock path. This was nothing less than outright treacherous. I can only imagine this path when it is raining. Luckily Bene had been able to score a bamboo walking staff at the Albergue in Pamplona. She had been walking without a stick to this point. A previous pilgrim decided this was no longer needed and would be helpful for someone else. What luck. Without the pole this descent would easily result in twisted ankles or worse.

Finally we arrived at the small town for lunch, sun burned and exhausted. Bene had applied sunblock but it only reduced the suns powerful effects somewhat. After a hearty chicken, lettuce, cheese and mayonnaise sandwich we pried ourselves from the shade and the chairs to complete the last 11 or so kilometres.

If we thought it was hot before we stopped for lunch…. this was now literally oven-like. There was no shade to be found anywhere and we decided to put the hammer down and get this over with as soon as possible. As soon as possible turned out to be never ending. Each foot step was laboured and our conversation was reduced to tiny bursts….. “You OK?”….. “Yeah”. (Neither of us was very convincing when we answered)

Luckily Susan had convinced us to reserve at a small, but highly recommended private Albergue in Puente La Rienna. When we arrived we were both spent….completely.

Bene and I agree, never will either of us start our walk so late in the day. The price we paid was too dear, especially in this heat. I can only imagine what this part of the trip is like in July and August.

Susan as it turns out decided to stay at the monastery and we may not be seeing her for quite some time. Of course we realize this is the reality of the Camino. We will miss her and continue to ask about her, hoping she is well…….but this is her Camino after all.

We realize this may also be the last we see of dear Eddie for some time as well. We will miss him too and can only wish him well.

And now I must concentrate on my recovery from the day.

This site uses Akismet to reduce spam. Learn how your comment data is processed.